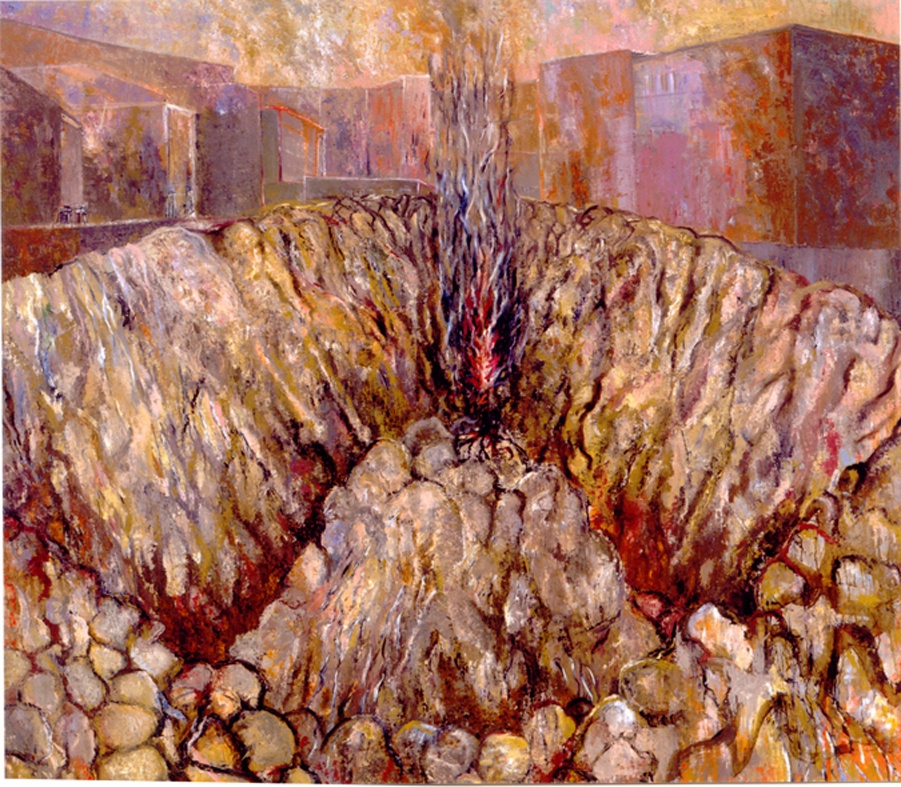 Art is a device of the imagination that investigates the limits of space and time altering the route of History.
The short but explosive tradition of Modernism, on the contrary, declared its autonomy from all the trodden paths of History.
Post- Modernism emerges as the affirmation of hi¬storical continuity, so that the past activates itself dynamically within the art of the present I anyhow think that the rejection of Modernism-Post-Modernism, is rather schematical, since it ends in incomplete and at the same time extreme forms. A work of art bears within its nature the challenge of rejection and the seed of the new, as it advocates another reality, a different instiutionalization of society. On the other hand, exactly because its cultural value and an aesthetised ideology, it presents itself irrevocably linked to the dialectics of civilization; thus today if we evaluate the whole experience of the past, far from nairve impermeabilities and from prefabricated ideas, we can delve into the core of a work of art, to study it for what it is, and not for what some systems of cultural power impose on it to be. The work of art cannot be conceived outside the dialectics of History, whether its ideological bearing functions as an affirmation or as a negation of historical tradition. Certainly, it is different for one to study consciously the evolution of forms in time and space, and it is different to illustrate superficially History, imitating on the surface some styles in a sort of cultural collage, as it very widely happened during – at feast – the last decade, and what is more, with the acceptance of many theoreticians of the Post-Modern.

Having the above in mind, I believe that Marilena Zamboura with the moral attitude of her painting comes to clarify some ideolipsies In a silent yet adamant way. The artist as she paints, she mainly depicts the agony of painting; that is, her agony to create the expression of an immediate as well as an absolute feeling. Because this agony of research is finally the stable criterion as to what is really avant-garde.
Her essential preoccupation remains the metastasis of individual emotion into a collective experience. The present entity of her work, free of facile references, illustrates a ruthless and absolute world.
Until now her work has drawn its inspiration from the poetry of walled – in spaces, and has been a reference to obsolete images, an appeal to lost childishness. The focus of her research today, is on more serious problems. Today, she is preoccupied with total interpretation, not on fragmented depositions of her own ego, the solidity of form and the efficacy of the image regarding the interpretation of time and space. Since the artist is content to paint on canvas, her goal is not so much the re-presentation, but the creation of a self-sufficient universe, composed of a visual field of personal and inter-personal symbols. The exhaustively modeled painted surface includes a variety of ideotypes: the cave, the stone-road, the fire, the burned out trees, the young child – a figure now fully understated – and the intensely stressed differentiation of “in” and “out”. Space now is nothing but a dramatic incident that halts time, freezing the events as they develop. The scene of a city interchanges with a “nature” landscape. Of course both are on trial, ready to be upset, the painting space is finally something completely different The function of time as a live experience and a treasured desire, is obvious.

In her early pictures, the artist insisted on the depiction of lost time. Now her intension is clearly more ambitious. The subconsciously formed images express a metaphysical awe and compose comments, by this time, on the dynamics of time. Time, that at times moves in a direct line, and at times deviates marked by anxieties and phobias, now turns into a plastic event. With her large figurative canvases, the artist sets up a stage: it is an alienated space, with no significant features, and which she looks down from high above; at times she envisages it as fragments and at other times she composes it as a whole; the spectator is always an accomplice. This space often resembles the city landscapes of Waida, or the metaphysical space of Tarkowsky in “Stalker”. The enhancement of colour has long been banished. Colour now expresses its own self. The easy and short lived slogans have also been banished; as, let’s say, the ecological ones.

Here the main effort consists in making visible and readable the emotional element through sensations but far from cheap sensationalism. The drama needs no dramatization. The artist refuses to get involved in painting formulas, she re¬fers only to her past and historical experiences.
Among the international parallel instances is the case of Anselm Kiefer. But even Masaccio, when he was painting the expulsion of the protoplasts in the Chapel of Santa Maria del Carmine for the Brancacci. It was then, for the first time in the Renaissance art, that such a geometrical austerity expressed the convention of time and space. Masaccio transforms a religious theme into an existential contemplation. Adam and Eve, deserting the timeless euphoria of paradise, actually activate historical time. Since that era, civilization will be considered as a summing up of individual unhappiness. The drama of the image is composed with the extremely vacant space and the subliminal presence of time.
Her present works include a series of small dimension paintings, that somehow, are the plastic studies for her big compositions. They are abstract works, in which colour functions, at times, lyrically and at times as a bearer of intensity. These small works, completely autonomous in their painting maniere, prove the great abilities of the painter. Marilena Zamboura does not exhaust herself in outward gestures, but builds her vision with conte¬mplation and moderation, dedicated to the realization of what the naked eye sees.

Her landscapes are “conceptual” meaning that they reveal a complicated code of information. They express the oppressive weight of space, and at the same time the manifold meanings of their context. And finally, it is with tenderness that forms intentionally aggressive are joined. The artist’s work is at a turning point, as is every real creation, that is, in that extreme situation, that transforms the non-being into being and where, as the various formalisms are being surpassed, and the real revolutionary image is conceived.

THE ONTOGENETIC AND PHYLOGENETIC DISCOURSE IN THE ART OF MARILENA ZAMBOURA

An artwork reproduces social and historical conditions which will be obsolete in the future. It shows us an artist’s evolutionary course to humanisation through his or her oeuvre — in this case, a painter, with her visual work like a bud sprouting in the light of beauty.

The general subject is the monocratic and almighty Nature, the Mother of all, who bleeds from the destructive mania, the externalised self-destruction mania of her ‘only begotten’ son, man, when the barbarian rapes nature and the nightmare of violation is mirrored on the soul of the modern artist as the autonomous causality is abolished by force and a different pace is imposed. And the painting shows what remains through that which is on the way out. The moment selected for the picture is immediately after the deed is over, so as to expose it in its entirety.

One of the paintings deftly portrays the fire of collective knowledge, surrounded by the stones of an ecumenical soul, shedding its light on the city which has nature for its foundations; nature is constantly in motion, ceaselessly creating, while the city is the collective work of society, the self-objectification of the collective consciousness. Also at work here is the contrast between the downward gravity and the upward weightlessness of the elements.

And the setting of nature is all empty of human presence, in a discourse of absence and presence, while nature itself participates in the human drama of an ambiguous awareness of the evil deed and guilt for this evil deed. The contradictory fact is reflected everywhere of a small but privileged social group dominating over nature and, through processed matter, over the rest of society so that good cannot find a way into human potential, as evidenced by the closed, exit-less spaces around nature, the Mother of all needs as well as the Mother of satisfying all needs. And everywhere we see a density, a confined impulse.

The personal mythology of the painter includes a symbolism of paternal authority dwindling along with the trees, being inextricably linked to the institutions of middleclass society which are like lifeless things. Man’s ties with nature are forgotten, the natural definition of humans falls into oblivion and so does the fact that human history is part of natural history. Imagination is invariably a transcendence of the plausible appearance of Art, the erotic, death-defeating union with nature is shown as utopian: death is a reality that dominates over the construct of civilisation. There are no flows in sight; the myths of the Greek race are crystallised into national conscience. One can discern the failure to achieve the transcendence from the social conditions which spawned the artificial construct towards the new construct of personification,  and allow this ongoing discourse to reveal the truth of free individuality.

The memories of the Greek race stagnate beyond historicity.  Here is the love of civilisation failing to unite the scattered beings among themselves or with nature; the death of love climbing the stairs to the temple of civilisation.

In short we can say that the beauty of the work lies in its truth, in the robust perception of social structures as personal elements and the reverse—the realisation of subconscious processes and their artistic elaboration. It only remains to join the painter as she whispers the question: do we need to go back to nature to learn what civilisation is? 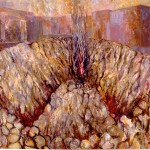 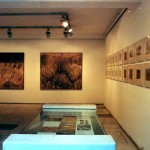 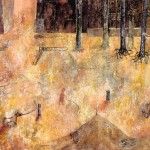 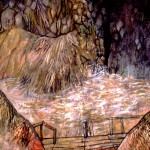