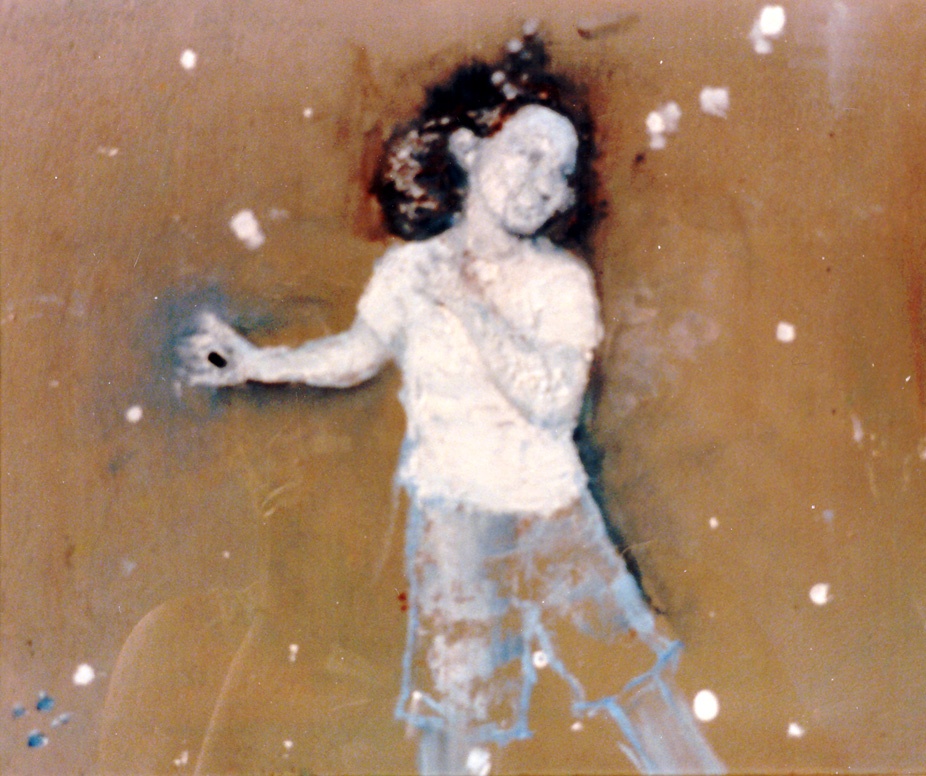 In Pursuit of Weightlessness

The apotheosis of 60s and 70s avant-garde innovation was followed by its “end” in the early 80s – an ending that was at the same time the beginning of a post- avant-garde art termed by philosopher Jean-Frangois Lyotard le condition post- moderne.”This climate of “change” in visual-art discourse was marked by the return to/of painting in what was essentially a binary process. On one hand painting reemerged from nearly twenty years of fruitlessness and “oblivion” (its denial by the avant-garde); on the other the artist rediscovered his/her tactile relationship to the work of art – that at once age-old and contemporary balance between visualizing and making, which are creativity’s two fundamental axes.

Thus, since the 80s, a series of painters and tendencies have come into being in the international arena. Whether they were the young expressionists or the heftige Malerei in Germany, the Italian transavantguardia, the figuration libre in France, the graffiti artists led by Keith Haring and Jean-Michel Basquiat in the U.S., not to mention other examples, their main concerns have been the image and its relationship to the viewer, the issue of the painting’s communication, color and materiality, along with the reactivation of art’s tactile memory, all in pursuit of a balance among the new conquests of technology and science as well as all the technical elements already in use in the visual language.

In Greece, too, this same context generated a series of artists who reacted accordingly in response to the spirit of that pursuit. Among them is Marilena Zamboura, whose career since the 80s has been characterized by an obsession with the painting process.

From the outset, Zamboura’s need to discover a language that would function as a supplement to her life led her to art and, more specifically, to plant the kernel of her survival in the soil of painting. An existential choice such as this, however, is tantamount to establishing roots, the basic feature of which is a desire to plant something firmly, to find a anchor of support. This explains why one can easily discern the strong presence of gravity and earthliness in the work of this primary 80s period. In “Room” (1985) or even in other paintings such as “Dolls” (1986) or “Hotel Pallas” (1987), it’s immediately apparent that the corporeal weight of representational elements are bound by their earthly pull. The highly expressive colors, their materiality and the usually distinct large-scale figures come to declare their obvious presence alongside the dynamically handled oil paint, as well as the legible lines, outlines, and basic pictorial structure. A concrete manifestation of the artist’s profound search for identity through her existence, this is something which stems, certainly, from the establishment of roots and the use of earthly material elements to the degree, in fact, where the figures occasionally become virtual reliefs, thus upsetting the traditional boundaries between painting and sculpture.

Of course, one must bear in mind that such artistic behavior is a product of the revitalized tactility at which Zamboura is so skilled. And such an organic synergy with tactility is not normally consumed in esthetic games, but is a condition that allows the basic pictorial components to grow perennially, thus contributing to their perpetual dynamic change.

In Route to Weightlessness

One also observes this kind of change in the artist’s latest works in which the attempt to loosen the bonds of earthly gravity is characteristic. Just as upon taking its first steps, every living organism wants to run on its own, seeking freedom from its “rooted” prison, just as a flower immediately grows upward as though wanting to touch the sky, so too in these paintings of Zamboura’s, the precise application of color, its balanced proportions, the transparency and ethereal quality of the figures, the laconic gesture of the outline and line, and the spirit of ongoing explosive fragmentation in the pictorial space are all features indicating a route between the earthly and the celestial. They form the record of a personal pictorial syntax and grammar that now eludes the bonds of classified symbolism to privilege the essential as sign and element.

This attempt to escape from a rooted towards a weightless state is not unlike an MR I: the basic pictorial foundations appear in order to be activated by painterly intervention. It is a “return” to create a new beginning for the dynamic course of painting in its molecular dimension, a “return” to the inside to make the painterly outside more comprehensible.

Take, for example, the painting “Doll Couple, Sunset” (1998). The two joined black figures, which might remind us of Matisse’s papiers decoupes or even paper shadow-puppets but generally remind us of something made by hand or by a hand- driven tool, these black non-objective figures seem to either emerge from inside the painting or to have been placed upon its surface. Their mobility as well as the weakness of their painterly intensity (they might be, say, cardboard or fabric collage, or paint, or the material surface of the painting emptying its matter – i.e. void figures, and so on) is accompanied by an air of weightlessness much like that of astronauts in a painted outer-space. There’s also that feeling of extrication from this earthly pull which makes Zamboura’s paintings sculptural, theatrical, and painterly all at the same time.

The decreased representational gravity offers greater freedom and mobility to the pictorial components, which in this way reveal and are revealed, activate and are activated, resolve and are resolved. Without neglecting formative pictorial convention, each internal element of the painting moves and is moved, thus achieving from within the reversal of the painting’s introversion. This perpetual permutation leads to permanent pictorial transformation, while the painting takes on the functional aspects of a kaleidoscope, monitoring and displaying the cosmic dimensions of the work of art.

There is an outwards movement, but this movement always bears the marks of the inner experience. Zamboura’s recent works depict this in a way. They are like an attempt to paint the sensation of the Platonic cave: while their pictorial foundations break the bonds of representationalism and the gravity of their roots, they also carry in each step the vestiges of this former bond – as though they wish to flee the cave, but haven’t yet definitively done so. This could occur in her painting at some point; the roots could possibly uproot themselves. But for the time being they follow her. They are angelic shadows, these mobile roots in Zamboura’s painting – like meteorites embodying the earth and the heavens all at once.

Lightening and The Void

This occurs to the extent that one might say the earth and the heavens collide in the interests of the space and the painting’s rhythmic tension. Let’s take a look at another work: “Black Shoes” (1999). The two discernible black shoes signify feet and solid ground, the earthly, or at any rate something directly related to gravitational force and a supportive base. However, when we look at the painting we see nothing of the sort. We can’t tell if these shoes are touching the ground or anyplace else, or whether they’re even standing, or whether or not they’re in mid­air. It’s as though the earth and the heavens are a single indivisible entity. It’s as though its materiality is indistinguishable in various places. What is exists is the territoriality of matter, the mobility of representationalism, and the artistic unorthodoxy of the pictorial logos. There’s the impression of transparency and weightlessness, fragmented figures in flux, a mood found in all her paintings – such as “Girls,” or “Stop at the Dionysian Altar” (1999), etc. – an attempt, say, at the dynamics of essential pictorial elements by releasing them from the weight of the earthly and the representational.

One may also view the black and white intervals in her paintings (“Large Garden” (1998), “Pauses-Threads” (1998)) like the artist’s touch that carries within it the desire to release the painting from representational and material gravity, to puncture it so it can breathe, to make it more supple and light – a tool for flying in space. The discontinuous color planes, those visual intervals, are the concrete evidence of tactile activity in Zamboura’s painting. This tactile making permeates the whole of her work, and doesn’t hesitate to use the most contemporary technology in its desire for visual alteration. Thus, many of these works (e.g. “Girls”) first passed before the gaze of the video camera and were then photographed before finally being received by the painter’s eye. And this filter between the painter’s eye and “reality” (the model) is a way to contest conventional vision. It’s a way to pose questions regarding what is “real” and visual-art reality. It’s a way for the painter to wonder whether or not she sees well, whether or not she should correct the perspective of her “reality.” It’s the pursuit, perhaps, of a “different” pictorial vision that balances the internal with the external and seeks the spiritual substance. 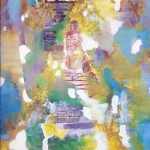 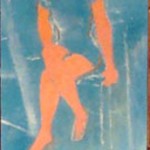 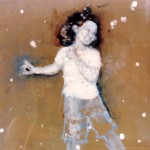 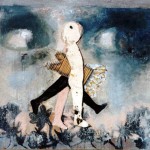 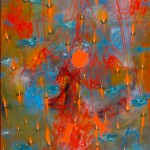 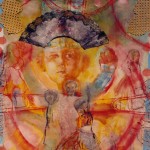 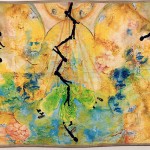 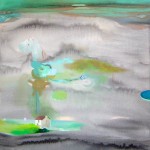 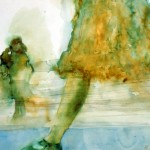 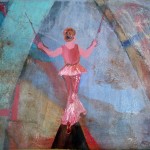 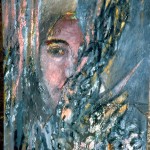 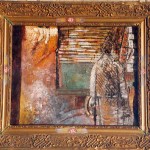 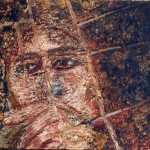 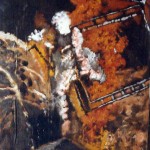