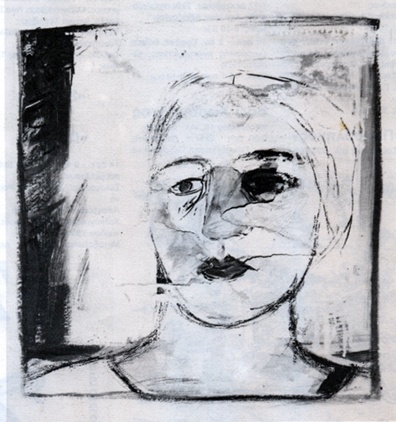 I have often written about derivative artists. Unfortunately, it’s almost impossible to get away from them. Maybe we should say that the DEGREE to which they depend on other artists for inspira­tion, or the degree to which the inspiration comes from their own, soul, is the important thing. In the exhibition of Marilena Zam­boura at Syllogi Gallery, the artist’s first big exhibition (she is oniv twenty-six), we see more of the latter than the former. Yes, the in­spiration from other artists is there, especially from Leger (Zam­boura admits to being impressed by him), but there’s such a healthy dose of her own spirit in these works that we can hope for her fur­ther growth as an artist on her own terms.

What she has taken from Leger is his interest in the monumen­tal figure. Of course, the interest is not his alone. The Kouros in archaic times was always sculpted larger than life on the theory that size has a connection with grandeur. Even Picasso went through a monumental stage. Recall, for example, his Standing Nude of 1922, Leger’s figures were all huge in height and girth (the Kouros, on the contrary, was tall, but not bulky), but they also had a connec­tion with the machine that is refreshingly missing in Zamboura s work. Her work is humanistic in spirit and growing from an early stage in her art when she painted only herself (a narcissism still present in several paintings), but she now feels she must “leave myself and go somewhere else, somewhere different.”

It is this new direction she is still searching for, although it ap­pears that she has begun to find it through her friends. Some of her small sketches of women—or large oils of men—are quite good. A lot of these are titled only Girl or Figure; others bear specific names.

Zamboura’s forte is obviously the figure. “I could never paint landscapes,” she says. She explores the figure in various ways-sometimes just the part of the body-hands or torsos ,feet, or legs.She does these in monumental size, as in the painting that begins with the bottom half of a bikini and takes us on down.

There is something quite powerfull about some of Zamboura’s monumental figures. I think the most inspired is Woman ,which is personalized yet at the same time symbolic. The woman stands with a fat baby in her arms and a dog in her side. In facial expression, in color, in form- this is an outstanding work.

In other paintings, though, she departs from her own vision and we get the horse-faces of Picasso or a whole collection of paintings very derivative of the Callifornia School in America (although she says she never heard of them). Sometimes her colors are nicely used as in Stelios ; other times her dependence on gray, blue, and pink becomes tiresome. Two of my favorite works are of cats. One is a simple sketch in blue, red, and black, but here she gets down to the essence.

The work of Marilena Zamboura is now quite different from that seen in her previous exhibitions. Her latest show at the Aithousa Technis reveals a most amazing change- and a giant step forward. Her canvases are huge and the works have problematic meanings. They all bear titles that give a clue to these meanings: The Rejected, The Crowded, The Impassable, The Headless, The Absurd- i.e., a litany of the feelings of modern man faced with so many obstacles to his joy, peace, and happiness. These are painterly works- colors in all possible hues laid on in layers then scrubbed away to reveal what is below.

Zamboura has also paid great attention to line-and to form. Strange shapes have been chosen-a monstrous egg-shape, for example, like a dinosaur’s egg. These seem (forgive the pun) pregnant with meaning. The feelings aroused by Yeats’ poem:”…And what rough beast, its hour come round at last/Slouches to Bethlehem to be born.”*

The inspiration of nature is seen in these canvases- not a benign nature, but a threatening one- somehow man’s enemy. Thorns protrude, small fires burn, cataracts rush, huge stones are piled up, strange shapes appear, the earth opens up, revealing its molten interior, sticks are bunched for the final conflagration.

In addition to these large oils, a series of what the artist calls “Small Notes” are on view, and they are exactly what she says they are: the “notes” that in the large canvases have been com­bined into a full score. They are usually brief glimpses at a small part of the total scene. When they do have new subjects, they are equally enigmatic: two bare feet, a smoker’s mouth, a man wear­ing underpants seen from the waist down. . . .

The entire show reveals quite a bit of the complexities of this, in my opinion, important new artist and her quest to deal with a troubled world. Her 1988 show at the same gallery dealt with the world of memory, the world inside one’s head (one symbol of this being an abandoned hotel with dusty empty rooms onto which she superimposed strangely altered children’s toys—a puppet, a doll, a rocking horse); the current show deals with the world outside. There is one reminder of her previous theme in a little girl playing with a stick, but it is basically the world of nature as a scary place, a world which man has tried to destroy but which can take revenge. The “green pleasant land” is no more. We have only an outside world that is a mirror of the troubled inner one. 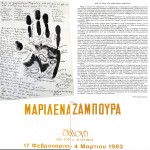 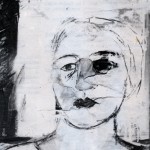 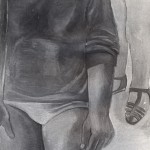 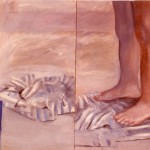 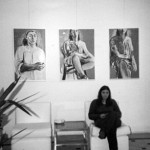